The blackberry is an edible fruit produced by many species in the genus Rubus in the family Rosaceae.

Although this usually black is often called that, it is not a berry in the botanical sense of the word. Botanically it is considered an aggregate fruit, composed of small drupelets. It is a widespread and has over 350 sub species. Native throughout Europe, northwestern Africa, central Asia and South America it has been used for ages in medicine and cocking.

It contains numerous large seeds that are not always preferred by consumers, although they contain oil rich in omega-3 (alpha-linolenic acid) and -6 fats (linoleic acid) as well as protein, dietary fiber, carotenoids, ellagitannins and ellagic acid. 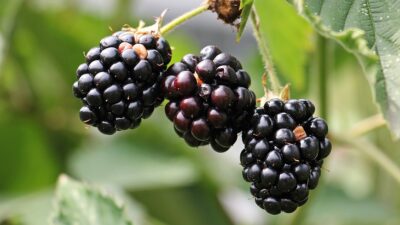