Rosemary is a fragrant evergreen herb, a part of the mint family (Lamiaceae), along with many other herbs such as oregano, thyme, basil and lavender.  Its leaves have a pungent, piney, slightly bitter taste and are often used sparingly, dried or fresh, to season foods.

Although the plant is naturalized throughout much of modern Europe it is native to the Mediterranean area.
In ancient times rosemary was believed to strengthen the memory and was used in literature and folklore to represent fidelity.

In Croatian tradition, rosemary is used in weddings as a welcome to the guests. Each guest receives a single branch of rosemary wrapped in ribbon (usually, red, white, and blue, representing the Croatian flag) which is pinned to their left side as corsages.

The herb not only tastes good in culinary dishes, but it is also a good source of iron, calcium, magnesium and vitamin B-6. Used medicinally, especially the flower tops, contain antibacterial and antioxidant rosmarinic acid as well as several essential oils which make the herb ideal for anti inflammatory, anti fungal and antiseptic use. 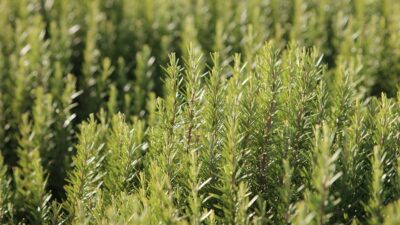 A traditional Dauphinoise, also known as a gratin, uses heavy cream and butter, but this healthy potato gratin recipe is lightened with whole milk and reduced-fat cream cheese to create decadent results with fewer calories.